If you're a home decor enthusiast like we are, you've likely encountered this beautiful style combining a base of white with intricate deep blue line work. Though underwhelmingly coined "blue and white pottery", this Chinese pottery aesthetic has a rich and fascinating history that drove the development of Euro Ceramica's Blue Garden serving dishes (pictured above).

The simple, yet poignant fact of the matter is that this art form is the result of human creativity over several millennia. This fact calls on us to appreciate not only the aesthetic and style of Chinese pottery as it exists today, but the efforts of those who started with nothing but a need for containing water and resources.

At some point in human history, it would have started with the intuitive act of cupping hands to lift water to a thirsty mouth.

Evidence is scant during this point in history as the next stage would have likely been the use of organic matter like leaves and wood to transport resources a longer distance--items that do not stand the test of time like sturdier materials do.

What we do know is that very simple vessels dating back to the early neolithic period are the first known relics in the Chinese region that eventually become what we know today as Chinese ceramics and blue and white pottery. What it looks like during this period of time is a simple vessel made of unprocessed clay, hand-constructed, and baked to maintain rigidity in a primitive sort of kiln. Eventually, that would develop into larger, asymmetrical pieces and perhaps three supportive legs underneath.

In relics dated back to 5000-3000 BC, archaeologists have observed a wire-like pattern around the vases. It is believed to be the result of a cord-lined mold that was developed in place of creating pots strictly by hand. This cord marking will be present on future pieces for centuries to come after that period, evidently a reliable method during this point. 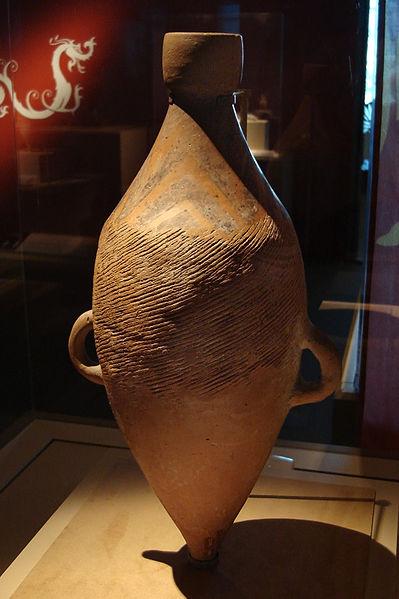 At the later end of this period around 2000 BC, more patterns and colors are beginning to appear. Alongside this development is the beginnings of writing found on tortoise shells and bones.

This period of time found improvement in the writing system, a booming bronze industry, and new approaches to pottery. The clay firing method is near to that of stoneware, and more glazing methods are introduced, providing a glossy and water-tight effect to the pieces. There is also evidence of an early form of wheel throwing being used in the production.

An exciting development also includes the use of Chinese pottery to create architectural pieces like building bricks and eave tiles. Vessels also begin to take on a more prominent spiritual aspect, being buried with their users, and even having some created exclusively for funerary decor. The beginnings of porcelain are evident. 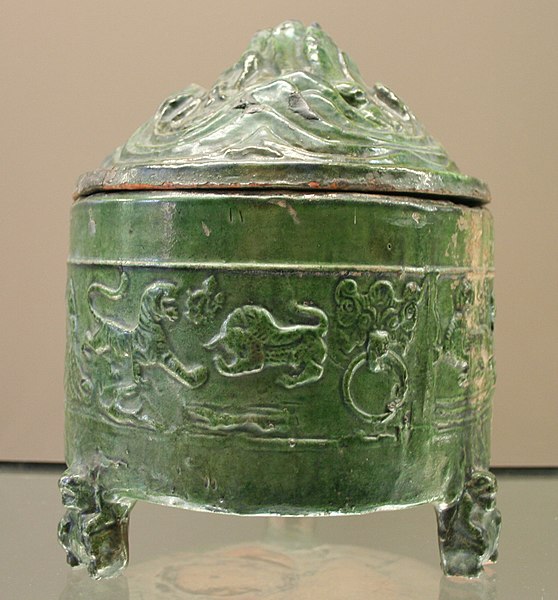 A 400-year period between 220 BC and 220 AD saw a strong, unified country in the Chinese region. An expansion in military, culture, power, prestige, and diplomacy saw a shift in the creative sphere: more metal wares, more use of silk, and a shift toward nature-based porcelain with secure glaze in shades of brown and green.

The technique of glazing earthenware was also developed in this time period (developing a chemical compound glaze that melts at a lower temperature, making for cheaper, more affordable production).

This era saw immense political changes, turmoil, and shifts in dynastic leaders. In spite of the turmoil and economic upheaval, however, there was also an impressive degree of technological and cultural growth, including that of Chinese pottery techniques, more closely approximating the blue and white pottery style.

Kiln complexes began to diversify rather than specialize in only one type of ware or silhouette. Spotted glaze techniques were developed, and a tendency toward more "flamboyant" jars came about. This included intricate designs and fully fleshed out statues and figurines.

Color variety increased with an emphasis on white wares and tricolor glaze techniques. This was partially influenced by a sense of internationalism and an introduction of more western shapes and techniques. Archaeologists specializing in this era also find more serving dishes made from ceramics, such as plates.

The boldness and flamboyancy of the prior era later shifted into a more muted and elegant approach at the start of 960 AD. Earthy tones, intricate impressions, and crackled glaze are just a few of the developments at this time.

However, 1279 saw the annexation of the region into the Mongolian empire. With this came a return to bold and ornamental designs, but with more experimentation on the designs and materials, including fully modeled figures ON vessels and more florals.

This aesthetic carried into the Ming and Qing dynasties--the dynasties best known for the prominence of blue and white pottery. Along with florals, there are more motifs around dragons and clouds, and more detailed animals.

Can you believe the history and time it took to get here? And this only covers the history of a very specific art form in a very specific region of the world! It is awe inspiring what we can learn from the world around us and from those who came before us. This concept is what drives our mission to bring the world to your table with our dishware. We seek out local artisans across the world to develop designs that are reminiscent of their culture.

And this concept is what led to the development of our Blue Garden serving dishes. If you loved this lesson in art history, consider bringing the rich world of Chinese pottery home with the Euro Ceramica Blue Garden collection.

All historical information comes from "A Handbook of Chinese Ceramics" by Suzanne G. Valenstein, The Metropolitan Museum of Art

Get the latest updates on new products and upcoming sales